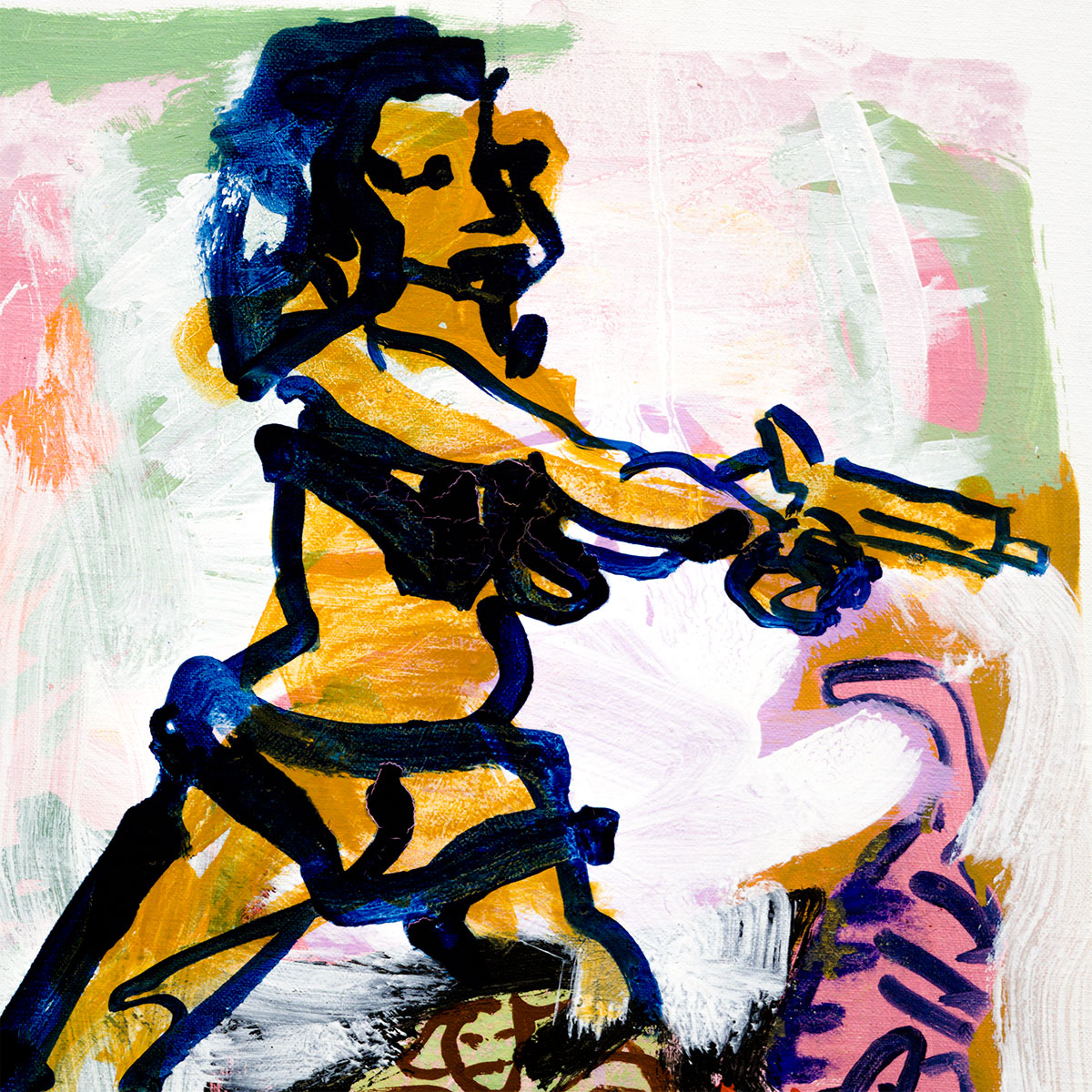 No one confronts his demons as kindly as Niels Reumert does, remarked an art collector during the artist’s exhibition in London in 2010. Niels Reumert’s career spans five decades in which he has explored his demons unapologetically, in a way so few of us dare to do. This is perhaps one of the reasons why he is even more relevant today than at the beginning of his electrifying artistic journey. The world has changed tremendously since 1971 and so has the artist. The one constant in Reumert’s artistic journey through the years is his rejection of the tame. Reumert was considered a young Danish wild animal (“et ungt dansk vilddyr”) initially by one of Denmark’s most famous art critics, the late Piere Lubecker, when the artworld first started paying serious attention, and it stuck. Today, despite both his work and the world around him metamorphosing, Reumert remains staunchly defiant – ahead of his time. Reumert’s lack of deference for the artistic convention of the day saw him painting as a neo-(abstract) expressionist long before the movement became part of the art zeitgeist of the 1980s by names such as Basquiat.

Reumert is a traditional artist only in that he paints with oil on canvas. That is where tradition ends. The brushstrokes are determined, masculine and often dark. But in the darkness of the petrol blue or haunting black, we find feminine shapes and contemplative themes. Mostly, we find a conversation with nature as a harbinger and, perhaps, an avenger of civilization. Birds, primates, tortoises, crabs, shrimps, foxes, dogs, cobras and frogs flutter, slither, creep up, leap and propel themselves, sometimes hesitantly and sometimes aggressively, from Reumert’s works. But there is a force behind all that animal potency, and that is an indomitable spirit – one that inhabits artist and spectator and commands both to stand in awe of nature. Reumert invites the viewer to contemplate the speed of development and contrasts it with human nature. We see computers, binary mathematics, war, technology, violence, and love all interrogated and concluded through an animal lens and an atavistic spirit.

Niels Reumert (b. 1949) was educated at Erling Frederiksen’s School of Drawing at Glyptoteket Copenhagen (1969), The Royal Danish Academy of Fine Arts (1974) and Accademia di Belle Arti, Venice (1972).
Reumert debuted in 1971 as part of the artist group Violet Sun. His first solo shows were at Kunstforeningen in Copenhagen in 1974 and Galloperiet in the free state of Christiania in 1977. He presented over 40 solo shows in the following 40 years.

In 2009, the Royal Library in Copenhagen, Denmark established a Niels Reumert archive.

We use cookies on our website to give you the most relevant experience by remembering your preferences and repeat visits. By clicking “Accept All”, you consent to the use of ALL the cookies. However, you may visit "Cookie Settings" to provide a controlled consent.
Cookie SettingsAccept All
Manage consent

This website uses cookies to improve your experience while you navigate through the website. Out of these, the cookies that are categorized as necessary are stored on your browser as they are essential for the working of basic functionalities of the website. We also use third-party cookies that help us analyze and understand how you use this website. These cookies will be stored in your browser only with your consent. You also have the option to opt-out of these cookies. But opting out of some of these cookies may affect your browsing experience.
Necessary Always Enabled
Necessary cookies are absolutely essential for the website to function properly. These cookies ensure basic functionalities and security features of the website, anonymously.
Functional
Functional cookies help to perform certain functionalities like sharing the content of the website on social media platforms, collect feedbacks, and other third-party features.
Performance
Performance cookies are used to understand and analyze the key performance indexes of the website which helps in delivering a better user experience for the visitors.
Analytics
Analytical cookies are used to understand how visitors interact with the website. These cookies help provide information on metrics the number of visitors, bounce rate, traffic source, etc.
Advertisement
Advertisement cookies are used to provide visitors with relevant ads and marketing campaigns. These cookies track visitors across websites and collect information to provide customized ads.
Others
Other uncategorized cookies are those that are being analyzed and have not been classified into a category as yet.
SAVE & ACCEPT