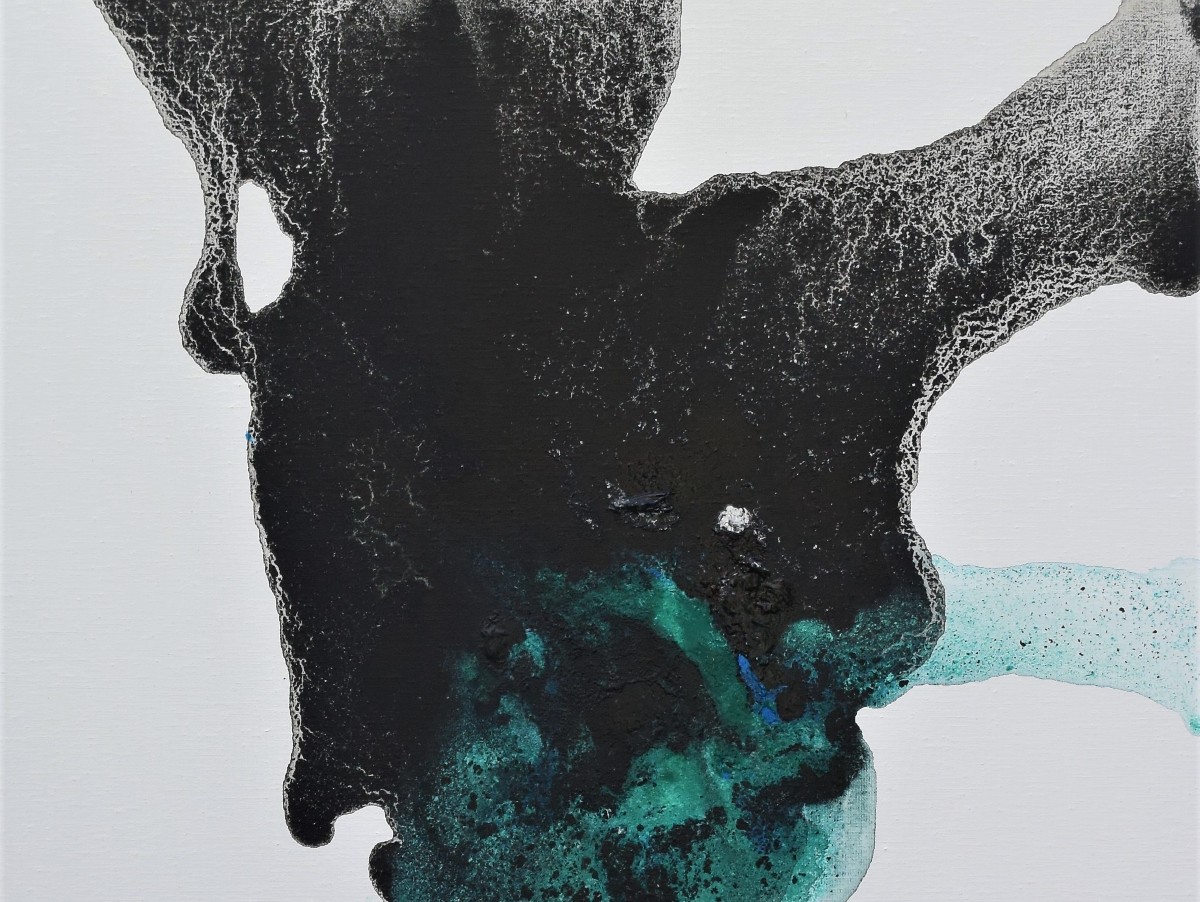 In Imprint, SIIKU’s new solo exhibition for Augustenborg_Project, the Danish/Greenlandic artist duo focuses on the human imprint upon nature in the context of the current challenge of the climate crisis.

For Imprint, SIIKU takes inspiration from biomimicry (biomimetics) and using prints of ice blocks with frozen acrylic as a working method, the artists relinquish control of the melting process, letting nature to be a co-creator of the artworks. SIIKU thus works in stark contrast to a world in which humans try to tame nature for their own benefit.

The works speak for themselves with a melancholy aesthetic expression in video, painting and installation. The ice used for the prints contains water from the port of Copenhagen and Arresø, as well as the Greenlandic ice sheet, mixed with industrial acrylic paint from China. The result is a creation stemming from the contrasts inherent in The SIIKU Manifesto, which the artists use as a creative compass in their practice.

Imprint reminds us once again that across social strata, gender, religion, age and ethnicity we may not be in the same boat, but we are in the same storm. We are all important little pieces in a complex puzzle when it comes to finding new ways to repair our relationship with the natural world and each other.

SIIKU
SIIKU is a Danish/Greenlandic artist group founded in 2017 by Rasmus Nielsen (b. 1984, Lyngby) and David H. Péronard (b. 1981, Nuuk). The name is inspired by the Greenlandic word for ice, siku, and the artist group works with a focus on creating solidarity and empowerment in a time marked by climate crisis and increased global inequality.

The SIIKU Manifesto is central as a guide for SIIKU’s artistic practice. The manifesto frames SIIKU as a dynamic artist group with the mission to create a new perspective, and at the same time emphasizes the artist group’s idealism and intentional naivete. The manifesto revolves around the contrast of materials and symbolic union.

We use cookies on our website to give you the most relevant experience by remembering your preferences and repeat visits. By clicking “Accept All”, you consent to the use of ALL the cookies. However, you may visit "Cookie Settings" to provide a controlled consent.
Cookie SettingsAccept All
Manage consent

This website uses cookies to improve your experience while you navigate through the website. Out of these, the cookies that are categorized as necessary are stored on your browser as they are essential for the working of basic functionalities of the website. We also use third-party cookies that help us analyze and understand how you use this website. These cookies will be stored in your browser only with your consent. You also have the option to opt-out of these cookies. But opting out of some of these cookies may affect your browsing experience.
Necessary Always Enabled
Necessary cookies are absolutely essential for the website to function properly. These cookies ensure basic functionalities and security features of the website, anonymously.
Functional
Functional cookies help to perform certain functionalities like sharing the content of the website on social media platforms, collect feedbacks, and other third-party features.
Performance
Performance cookies are used to understand and analyze the key performance indexes of the website which helps in delivering a better user experience for the visitors.
Analytics
Analytical cookies are used to understand how visitors interact with the website. These cookies help provide information on metrics the number of visitors, bounce rate, traffic source, etc.
Advertisement
Advertisement cookies are used to provide visitors with relevant ads and marketing campaigns. These cookies track visitors across websites and collect information to provide customized ads.
Others
Other uncategorized cookies are those that are being analyzed and have not been classified into a category as yet.
SAVE & ACCEPT